Traditionally within liquified natural gas (LNG) plants, there are ‘cold service’ applications and cryogenic. Cold service is typically between -29 °C and -50 °C.

Valves used on cold service are required to be operable at -50 °C, that is, be able to be opened and closed and maintain leak tightness through the gland and across the seat at the valve design pressure.

The slimline monoflange you have developed for cold service appears to have a bonnet extension. Why is that?

Valving for cold service do not require cryogenic bonnet extensions, however, they often require smaller extensions to allow for the application of lagging.

Lagging types and thicknesses vary from project to project and can be up to 50mm thick. The reason for using a bonnet extension with lagged valves is to move the top of the bonnet outside the lagging.

Should the valve ever develop a gland leak, the produced fluid will not be trapped within the lagging and cause corrosion issues.

What types of valves are used in the monoflange? 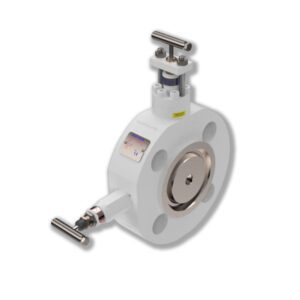 How were these valves validated?

To validate the two types of needle valves with extended bonnets, Oliver have utilised the rigorous testing requirements called for within the Shell specification 77/300.

Oliver has performed the 77/300 validation test within its R&D facility, on a 1½” Class 2500 block & bleed slimline monoflange with extended bonnets. The performance of all the gland seals at -50 °C were well within leak rate BH and seat leaks were zero.

Testing was performed at ASME pressure classes 600 and 2500. All the testing was witnessed by a third party.

What was the driver for Oliver to develop this new monoflange?

Following discussions with LNG project engineers, it became clear that whilst valve companies could provide compact needle valve block and bleed and also double block and bleed valves with a minimum design temperature of -50 °C, they were unable to provide verification reports on the operational ability of these valves at the low temperature.

In addition, any testing that had been performed was not with the necessary extensions to allow for lagging which is so often fitted to pipelines for cold service.

Looking ahead, where do you see potential for these slimline monoflanges?

The LNG industry! The sector is starting to come back following the pandemic and there has been a positive response from the engineers we have spoken to.

The monoflange is ideally suited for pressure instruments. It allows for the safe isolation of the instrument from the pipeline in a compact assembly.

Mr Shillito (M.Sc., M.Phil, C.Eng., F.I.Mech.E) is an engineer with over 35 years of experience in the design and development of a wide range of valve types. Starting his career in the nuclear industry, he moved to the oil and gas market, working on valves for both topside and subsea applications. He is technical director at Oliver Valves.

About this featured story

By subscribing to the free Valve World India & Middle East newsletter you gain free access to a snapshot of the latest tech-related developments in the Valve industry sector – delivered straight to your email inbox.

To subscribe to it, please leave your details in the form.

ABOUT US
Valve World Inda & Middle East is part of the KCI Group of Companies. We are a leading knowledge, communication and information company connecting business-to-business professionals by building and sustaining global communities, solving their information needs and helping them to develop their professional life and friendships
FOLLOW US
© Copyright 2023 - KCI Media Group - Valve World India & Middle East

We use cookies on our website to give you the most relevant experience by remembering your preferences and repeat visits. By clicking “Accept”, you consent to the use of all the cookies.
Cookie settingsACCEPT
Manage consent

This website uses cookies to improve your experience while you navigate through the website. Out of these, the cookies that are categorized as necessary are stored on your browser as they are essential for the working of basic functionalities of the website. We also use third-party cookies that help us analyze and understand how you use this website. These cookies will be stored in your browser only with your consent. You also have the option to opt-out of these cookies. But opting out of some of these cookies may affect your browsing experience.
Necessary Always Enabled
Necessary cookies are absolutely essential for the website to function properly. This category only includes cookies that ensures basic functionalities and security features of the website. These cookies do not store any personal information.
Non-necessary
Any cookies that may not be particularly necessary for the website to function and is used specifically to collect user personal data via analytics, ads, other embedded contents are termed as non-necessary cookies. It is mandatory to procure user consent prior to running these cookies on your website.
SAVE & ACCEPT